The most successful entrepreneurs don’t keep secrets about their success. They have, time and time again, talked about what made them successful. Mark Zuckerberg, Bill Gates, Jeff Bezos and Warren Buffett are successful in their respective niche, but they share a lot of the traits that make them successful. Here are some of them:

Everyone has ambition, a lot of people have talents, and some people are geniuses. But all these are nothing without determination. So many people have the right idea to succeed, and have even formulated the proper equation for it. But all these will amount to nothing without determination. This is why there are so many songs and quotes attributed to dusting yourself off when you fall and try again. Because songs are inspired by real life, and in real life, determination often leads to success.

Determination, of course, goes hand in hand with hard work. Determination cannot be complete without getting your hands dirty, or without wiping the sweat off your brow.

In gambling, the more money you bet, the higher the reward—if you win, that is. If you lose, then you will lose a lot, too. Three of the world’s richest men: Buffett, Richard Branson and Elon Musk are all risk-takers. They don’t rely on just one type of business. They always try to evolve and do something that could go either way.

Take Branson: He started with a chain of music stores called Virgin Records, which quickly expanded and became a megastore. From the idea of collecting records, he expanded to signing musicians by creating the Virgin Records music label. From music, he took another risk and started his own airline company: Virgin Atlantic.

For his part, Elon Musk started a web software company then expanded to an online financial services company, which has since merged with another similar business and is now known as Paypal. Then he conceptualized an entirely different business—space exploration, through the company Space X. From one expensive risk to another, Musk also helped create the first electric sports car through Tesla Motors.

Space X was on the brink of failure after three failed launches. Musk could barely afford a fourth one but risked it anyway. And it paid off. “There’s a tremendous bias against taking risks. Everyone is trying to optimize their ass-covering,” said Musk.

Buffett is probably the most prolific businessman in the world. He owns over 50 companies of different nature and has stakes in dozens more. But he is smart about risks—he only takes calculated ones. That’s why at the peak of the Dotcom industry, Buffett didn’t immediately dive into it despite being known to dip his toes where business is hot.

When Zuckerberg started Facebook, his calling card stated: “I’m CEO, bitch.” It was a joke—but as they say, jokes are half meant. It showed the confidence—perhaps overconfidence—of Zuckerberg. A lot of bigger companies wanted to buy Facebook when it was still a startup. But Zuckerberg was confident about his ability to make Facebook as big as it is without other companies swallowing it up. Look where the company is now.

When you have confidence, nothing can pull you down—not the workload, the emotional toll and not the financial aspect. Everything has a solution—you’re confident of that. And when you are confident about your product, service or company, you can sell. Because you believe in what you are doing, you would be able to successfully market it to your target clients. Your confidence will make clients want your product or service.

While a successful entrepreneur should be confident, he should not be confident enough to say that he knows everything. He should always be willing to learn more and use those learning to make the business even better. If you’re at the top of your game, admittedly, you have learned a lot already. But the world is always changing; businesses are always innovating. If you want to keep up with the trend, then you have to stay ahead and continue to learn.

One thing that Amazon founder Bezos wants to learn more is what his customers want and need.  Amazon continues to evolve and innovate by learning about what the people want. “What’s dangerous is not to evolve,” declared Bezos, the fourth richest person in the world. And only with learning can a person or business really evolve.

Michael Bloomberg, who owns the financial services empire Bloomberg L.P., took learning to a whole new level by going to class. In 2012, he took up Coding Course. “I’ve never met a Nobel Prize winner who didn’t think they had an awful lot more to learn and wasn’t studying every single day. So when a parent says, ‘How much does my kid have to learn before they can stop studying?’ I don’t know how to break this to you lady or sir: There is no answer to that,” said Bloomberg.

Being passionate about your businesses encompasses all the above traits. When you are passionate about what you do, you are eternally interested in learning new ideas, confident about the future and determined to take risks. You are fully aware that when you fail, you just dust yourself up and try again because you love what you do.

In 2010, telecommunications magnate Carlos Slim Helu was ranked the richest man in the world. But when he appeared on CNN’s Larry King Live, the Mexican tycoon said it was not an honor to top the rankings of the richest people in the world. It’s not a contest, he said, it’s about competency. His driving force has always been: “Be driven by passion, not money.”

Most people know Gates, Zuckerberg, Buffett, Musk, Helu and many other billionaires when they have reached the peak of their success. So it’s easy to think that they woke up as billionaires. But each one of them went through hardships but they were just resilient enough to stand still despite adversity. And they were able to persist through the obstacles because they had determination, they took risks, they were confident enough, learned more and were passionate about what they do. 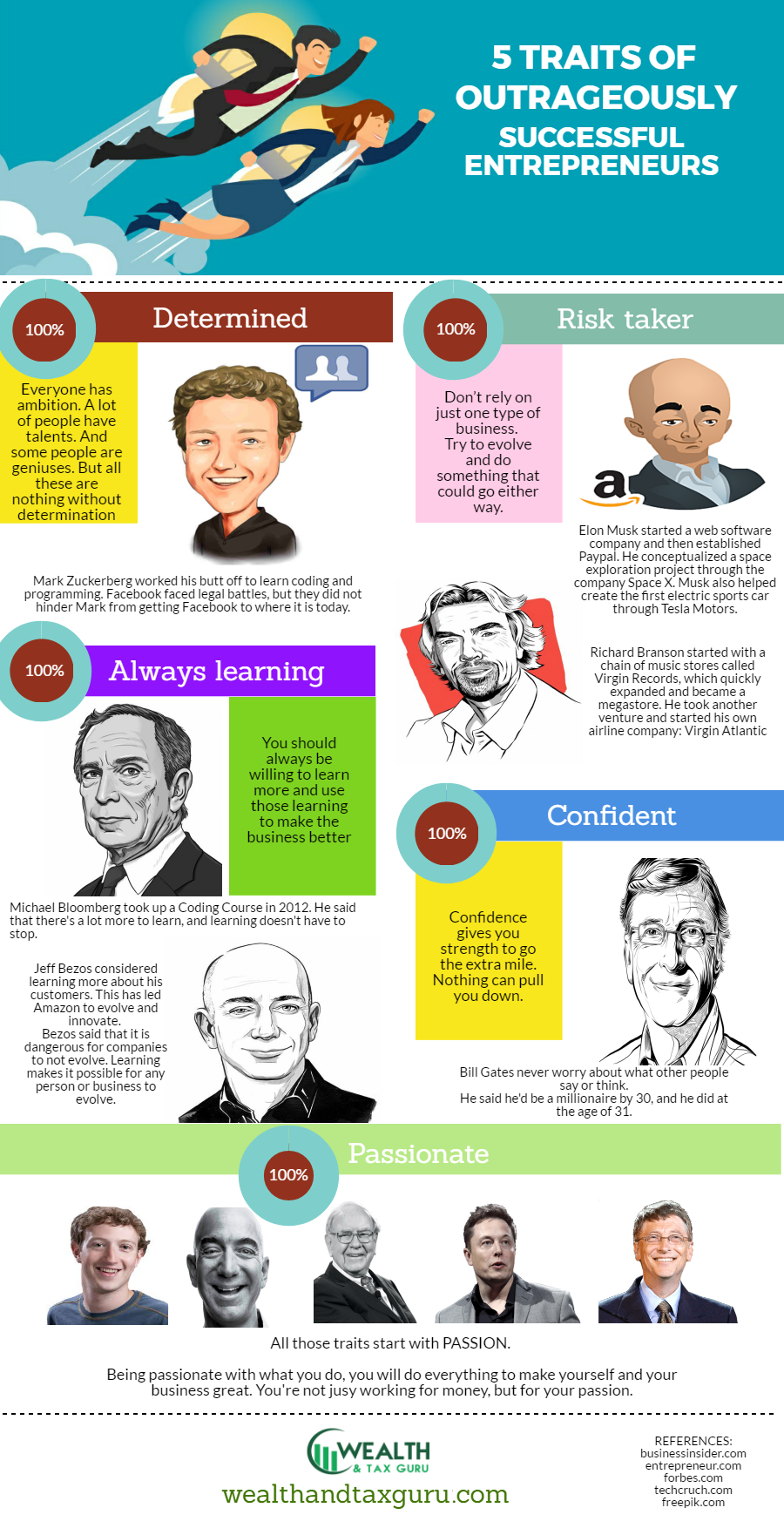